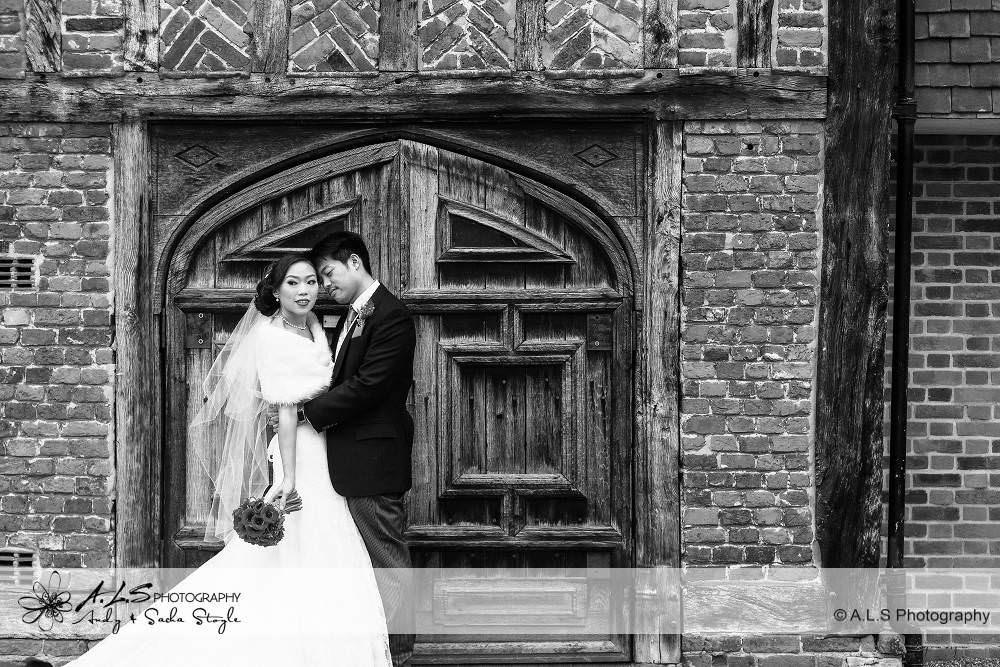 Great Fosters in Egham, Surrey was the gorgeous setting for this Chinese Wedding, it was our first wedding of the season, also our first Chinese one, we were so honoured to be asked to capture all of the ceremonies that were performed throughout the day that included ancient Chinese Customs that had been passed down through the generations.  It was an early start for all of us as Siene had to be ready a couple of hours prior to their Civil ceremony so that Wing had time to play the traditional pre-ceremony games that lead to his greeting Siene and her family.  Wing and his five Groomsmen, including his brother Yuen were encouraged to perform some bizarre forfeits such as, wearing frilly knickers, passing balloons between themselves without using their hands and waxing sections of the hair on their legs!  Wing was finally accepted by Siene’s Bridesmaid Elyn as suitable to meet Siene and her cousins led him to her.  So the first ‘Tea Party’ of the day took place and a lot of tea was drunk and gifts were passed from Siene’s family to Wing, with all of Siene’s family watching on, it was a little crowded in the hotel room, however, it made for a great atmosphere.  When it was time to leave the hotel to head to Weybridge Registry Office for the Civil ceremony, Siene’s Uncle lead her to the car under a red umbrella and Wing’s Father Kim drove them both, the rest of Wing’s family were waiting at the registry office for them.  The ceremony was lovely, attended by close family and friends, the Registry office is a lovely old building with pretty gardens, so we photographed the first of two confetti shots that day in the small garden along with a couple of immediate family groups before heading back to the hotel.  Even though it wasn’t the warmest day, it was dry and we could walk around the grounds photographing in the many pretty areas including the building itself, then around to the bridge, where the Bridal Party joined us for some photographs and for general antics, they were all great fun!  Once we had photographed all of their family & friends groups, the Big Group of everyone and the second confetti shot, we could all get back into the warm and listen to Paul Holgate a Frank Sinatra Tribute singer!  There were more traditions to come such as Siene changing in to her second outfit of the day, which was red and beautifully embroidered and once the wedding breakfast had been served, Siene & Wing walked around to each table and said a ‘Yamsay’ (cheers) the competition was fierce to be the loudest and make it last the longest!  Fabulous speeches followed, then came the ‘Tea Party’ from Wing’s relatives welcoming Siene officially in to their family.  The whole day had been so much fun, with so much going on and everyone enjoying every aspect of it, as we enjoyed capturing it.  The First Dance kicked off the evening entertainment and teh floor was soon full of guests dancing, only stopping to grab some hog roast for supper!

Our style of wedding photography is a mix of documentary photography, unobtrusively capturing moments, personality and emotion with natural, fine art style Bridal Portraits at a variety of wedding venues in and around Cardiff, South Wales and the UK.  For a further look at our images of our Cardiff, South Wales Wedding photography, please have a look at our Gallery or other Blog Posts and if you have any questions about our services don’t hesitate to leave a comment below or contact us.  Also if you would like to arrange your own Family, Child or Couples Portrait Session please email sacha@alsphotography.co.uk